Today I want to tell you about a tool I use occasionally but find extremely useful. I’m sure many of you fetch, pull, checkout, commit, and perhaps push using Git on a daily basis. In the same time, I doubt you bisect more or less often. There’s even a high chance that you have never heard about this command before. If you’re now curious what it is, then you have the right page open. Let’s get started with the explanation.

The official documentation tells us that “git-bisect uses binary search to find the commit that introduced a bug." It sounds fascinating, isn’t it? Just imagine that you type a command, pass proper arguments, and after some time get a list of commits which introduce bugs in your project. But wait, we already have git log for this. It works pretty accurate and rarely gives you something else. However, it doesn’t use binary search, so git bisect is probably intended for something else. To figure out what exactly it’s for let’s use an example.

Imagine yourself being a programmer. You start your day with a cup of coffee or tea . Then you pull fresh updates from a server and run tests to be sure that everything’s green so you can start with a new feature. But all your plans are ruined when you see “Tests failed: 1”. For those of you who have never been in such a situation because you have a zero-tolerance policy for red tests or simply don’t have tests at all, I’ve prepared an example project. If you clone it and do the steps described above (don’t forget a drink!), you’ll see something like on the following picture. 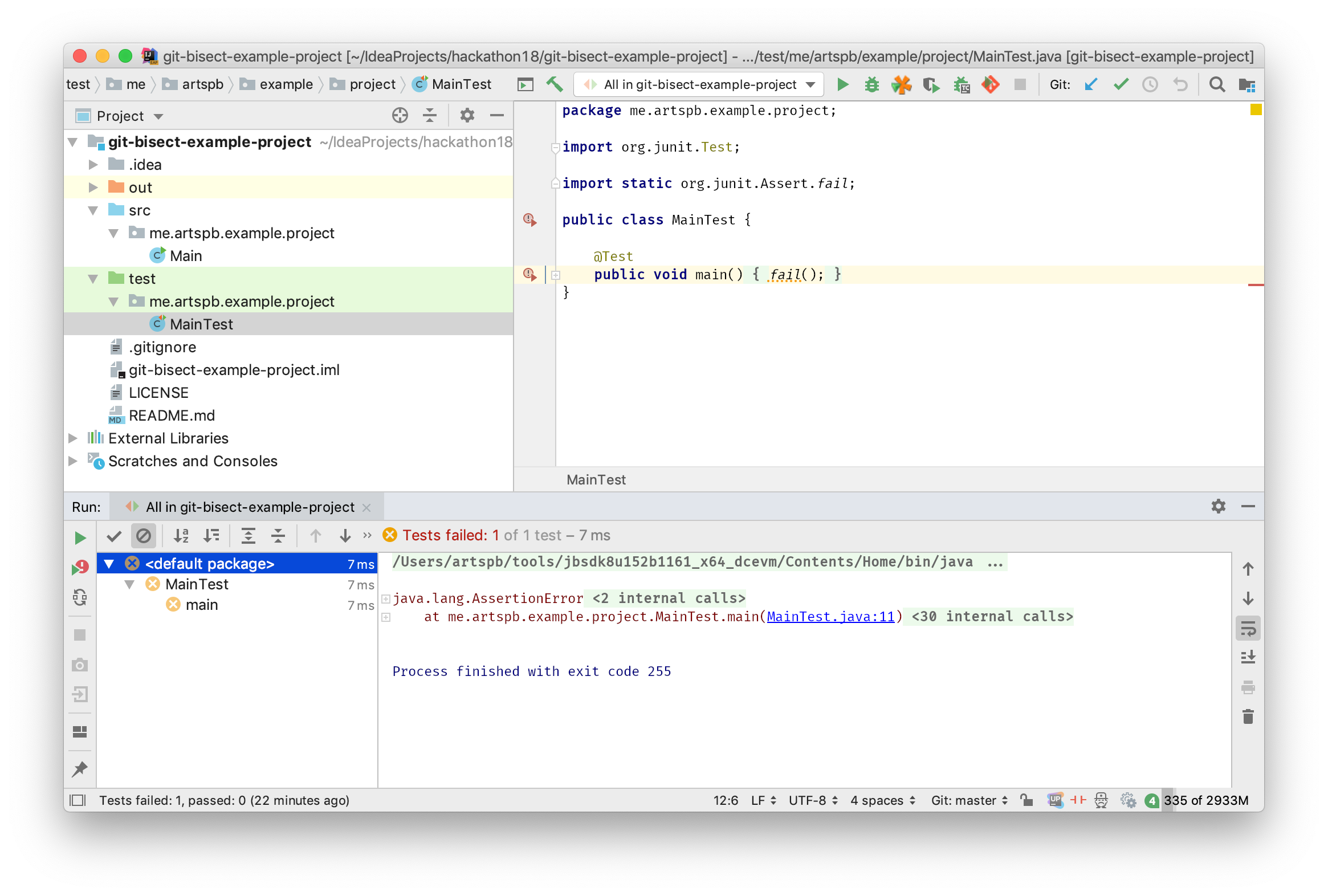 You feel lost. To proceed with the feature you first need to make tests green again. But at which point they become broken? Do you really need to check all the commits between master and the previous stable state where you’re 100% sure the tests were fine? But hey, this’s exactly the situation for binary search which we discussed in the previous post. It gives us logarithmic time thus instead of, say, eight commits we should only check three an so on. Here’s its definition if you don’t remember.

Binary search is a search algorithm that finds the position of a target value within a sorted array.

This is all we need to use binary search. And git-bisect, its implementation for Git, comes to the rescue.

You know for sure that six commits ago all the tests were green. To prove it, you invoke git checkout master~6 and rerun the suite. 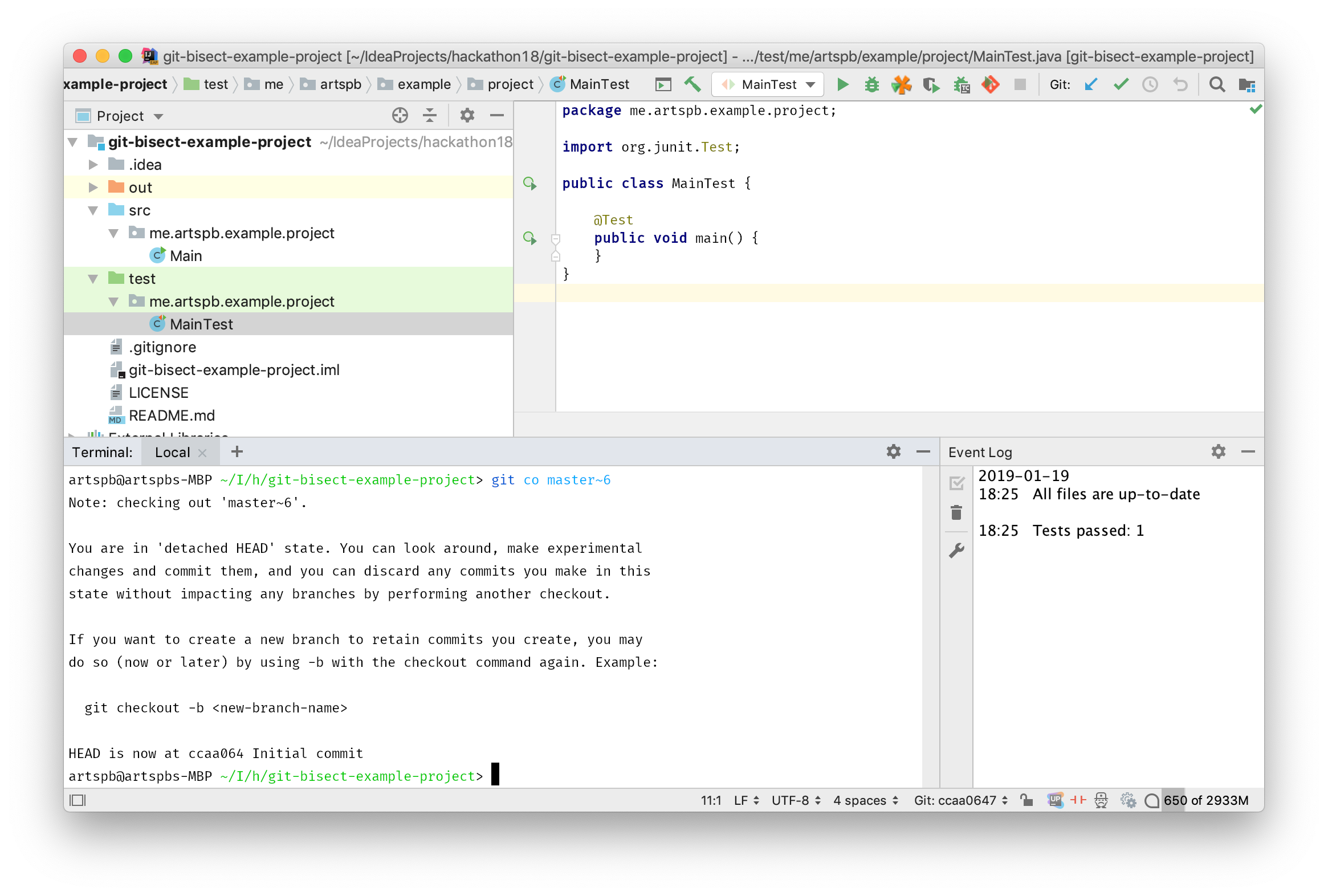 Perfect. The commit we’re looking for is somewhere in between master and master~6. You can check all five revisions manually or use the tool to reduce the number to three in the worst case. Of course, you open a terminal, and type git bisect start master master~6. You get the following output.

These lines mean that Git checked out the middlemost revision. It now wants to know whether the current commit is good or bad. The tests pass, so you enter git bisect good.

This time tests fail so you’re giving a different input which is git bisect bad.

The last step, the moment of truth. You mark the current revision as bad due to the failing suite. And… that’s it. You immediately get the result. 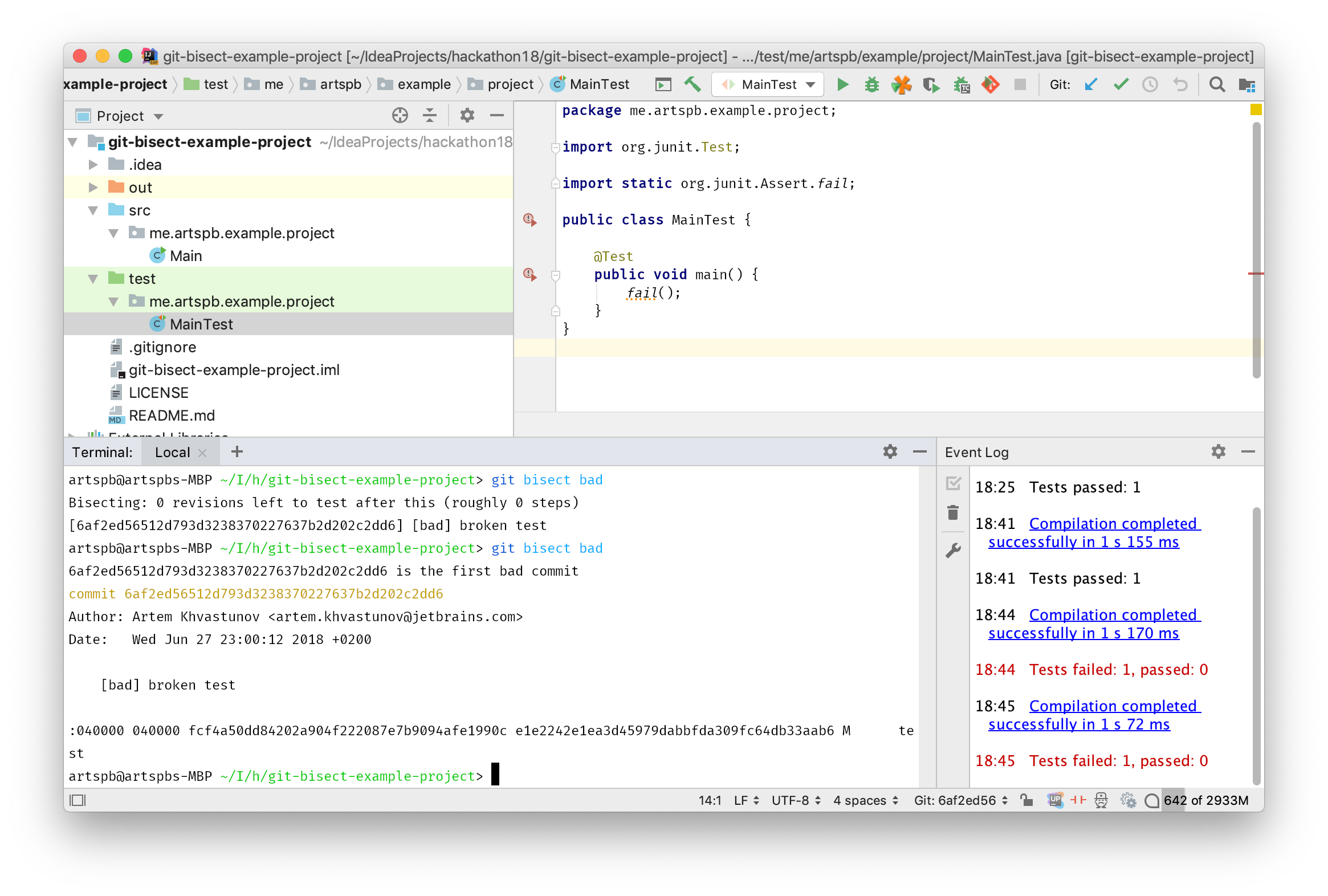 As simple as that, you’ve just found the commit that breaks the tests. You see the changes so you can find the cause. It’s now up to you to decide whether to fix or to revert. In any case, the day is saved, and you can proceed with your feature. Or, considering you had to check two commits less thus saving some time, you can justify one more drink, a well-deserved drink.

I hope you enjoyed the reading. Do you have any questions left? Is there something I should cover in more details? I’m open for suggestions. Also, I’d really love to know your experience with git-bisect. Did you have a chance to try? Was it a success? Please comment below or on Twitter.